The first part half of this post will discuss an overview of different testing techniques and approaches that you can use within your development cycle to improve code quality. Followed by some useful RSpec snippets and patterns when leveraging RSpec for testing your Ruby code.

There's lots of reasons to write tests as part of the development cycle of software, including but not limited to:

Different testing frameworks use different terminology, but in general the types of tests that a developer will often include the following concepts

Unit tests, or component testing, will test easily separable functions/modules in isolation. These tests are fast to run, and often fast to write. Often useful when testing standalone algorithms and objects with complex business logic which must be verified thoroughly.

Often done after unit tests are developed. These tests will verify that multiple modules work together in harmony. These set of tests can often be slow as multiple levels of code and abstraction will execute, potentially making database calls etc.

These set of tests will ensure that the full system works as expected from a user's perspective. This often requires replicating real user actions through a real browser.

There are lots of tools to choose from here, such as Capybara, a Ruby library for testing web applications via a browser:

You may even encounter Cucumber or Gherkin syntax tests, which is a way of implementing human readable user stories in code:

These stories will take the format of Given / When / Then:

Behind the scenes these human readable strings would be implemented programmatically within your language of choice. A runtime library would then glue the various steps together to complete the test:

Testing non-functional requirements, such as how many requests per second an API can handle, or even how fast a particular particular algorithm or datastructure is.

benchmark-ips is a useful library which will run a code snippet multiple times, comparing the relative performance of different implementations:

The library will also figure out how many times to run the code to get interesting data without needing to tweak the loop count manually:

Which tests should I write? 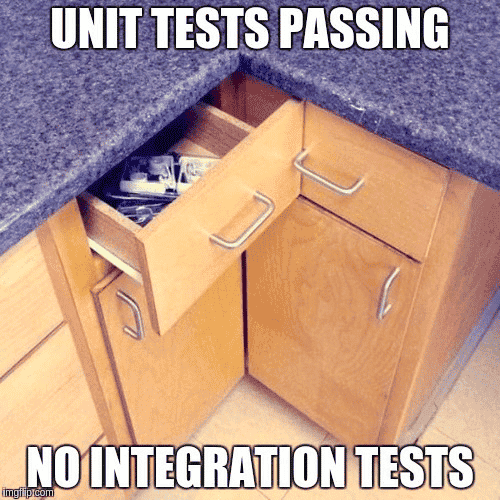 Unit tests are fast to run, and are often initially fast to write. Unfortunately as they often stub/mock external dependencies, they may not provide the reassurance that the system will work as a whole. For this reason, it could be suggested that integration tests provide the most for benefit for their relative cost. Whilst end-to-end tests will ensure that user stories work as expected, they can often be the most flakey.

You may consider writing a lot of unit tests, which are fast to run. Followed by less integration tests, and an even smaller amount of UI/End to End tests.

The testing ice cream cone can be considered an anti-pattern, as it is often an indication that the manual testing could be migrated to faster automated testing: 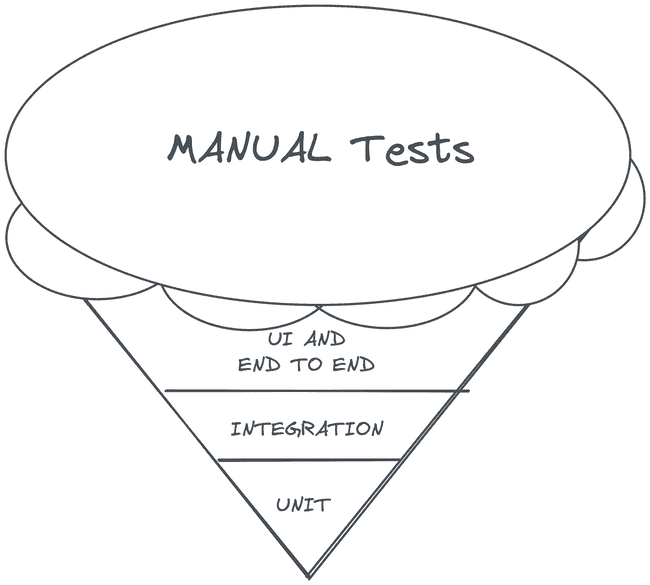 An alternative approach is to favor integration tests as a good middleground solution, balancing the trade-offs between test speed and usefulness: 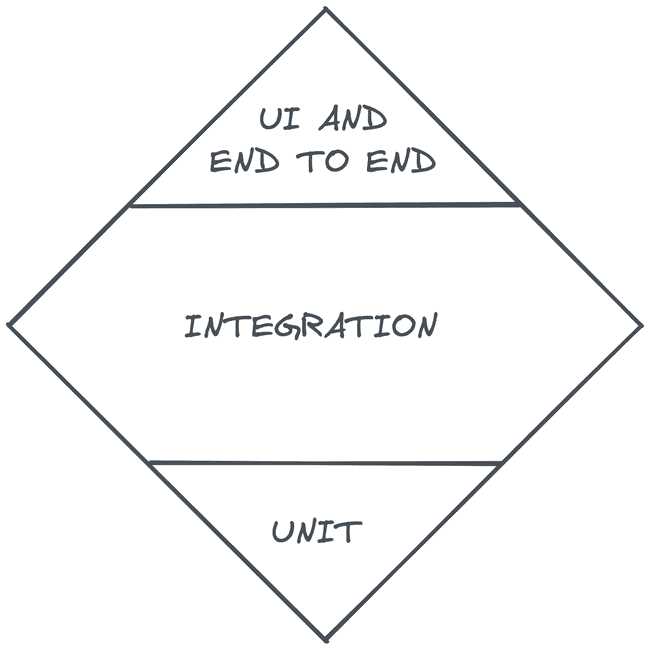 A common workflow as part of Test-driven development (TDD) is the concept of red-green-factor, summarised as:

This pattern will be repeated until the feature is successfully developed:

These tools are useful for highlighting code paths that are not tested, for instance this is the output of simplecov: 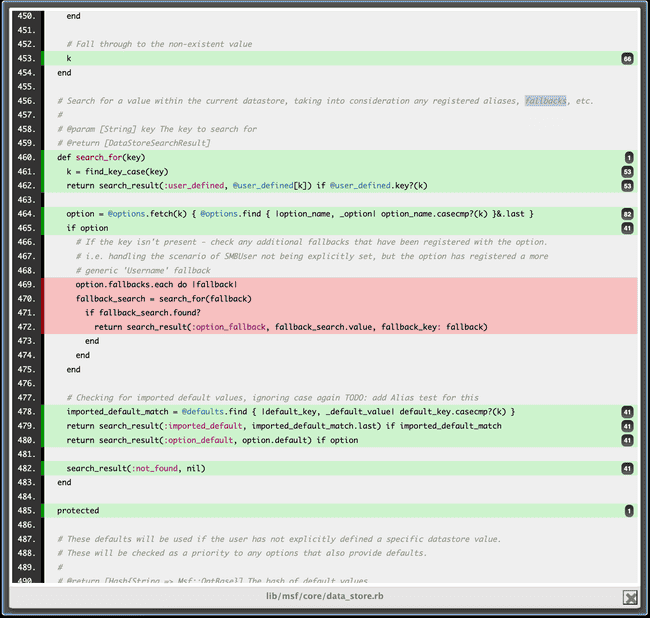 The existing test suite must be able to identify this new mutant code. If it does not, then the test coverage is not sufficient enough - or the implementation could be simplified.

Tools such as mutant can be used for this

When a developer is writing unit tests, a common approach is to:

Alternatively; From the lands of functional programming - tools such as Haskell's QuickCheck allow tests to be developed by asserting properties that the function under test must honor. This allows for the test library to choose arbitrary inputs to your test which follow the set pre-conditions, and for the post-conditions to be verified afterwards.

I recommend reading through betterspecs which curates a list of the current best practices for writing RSpec tests.

RSpec provides a domain specific language for writing tests. For unit tests you will want to use the real class name in the top level describe to signify the class that you are wishing to test. This will allow RSpec to load the class that is being tested, as well as provide access to useful helper methods later:

For system/end-to-end tests there will be a readable string for the describe argument, instead of the Ruby class that is being tested:

If you were wishing to test a class such as:

If you're testing an instance method:

If you're testing a class method:

If you wish to test a method, under a combination of different contexts and variations:

Given the following code snippet:

The following methods are available for use:

When we write unit tests in the format:

It's worth noting that this is actually just a bunch of function calls. For instance eq is just a function call:

RSpec provides multiple out of the box matchers such as:

It is also possible to write custom matchers:

The following snippet shows an example of registering a new matcher with RSpec which you can use in your test:

RSpec's matchers can be used within arbitrary data structures to test complex scenarios:

Tests that are unreliable, and fail non-deterministically, can be referred to as flakey tests.

By default tests should run in a random order, but the module author may assume that they run sequentially. Sometimes a test suite can fail due to a series of tests mutating external state, and the order in which the tests run impacts the overall test result.

The tests will be shuffled randomly based on an initial seed, which will be output to the stdout that ran the test suite:

Similar to git bisect, RSpec supports the --bisect flag. We can then run the test suite again, supplying the seed value:

This will then bisect the test suite until it finds the combination of tests which leads to the failure:

Tests can sometimes fail due to an array being returned in a different order. For instance, retrieving values from a database which are not explicitly ordered. To fix this, either fix the implementation to be deterministic, or update the matcher:

The RSpec matcher output will make it clear what has failed:

It works on my machine

In some scenarios your test suite may fail on CI, but tests will pass locally on a development machine. This can be caused by environment differences between CI and your local environment.

It's worth verifying the file names of paths within your codebase, as well as the file name that is actually stored on disk, as Linux has a case sensitive-file system. Any misalignment here could cause issues on a Linux environment, but work for a Mac/Windows machine.

Another difference is locale environment variables which configure the language, country, and character encoding settings for your machine. It's worth verifying these values via the locale command:

RSpec provides a nice matcher for the verifying that a method call has changed state:

Although it's best practice to test functions in isolation without needing to mock out time, it can be useful. For this reason Timecop can be used which is a gem providing "time travel" and "time freezing" capabilities, making it dead simple to test time-dependent code. It provides a unified method to mock Time.now, Date.today, and DateTime.now in a single call.

Timecop can also time travel to new points in time during a test run:

Data-Driven tests can be useful to generate multiple test permutations:

If possible, you should avoid testing against real services. We do this to ensure the speed and stability of the testing framework. For instance, if the remote service dies - we would not want that to impact test runs locally or in CI environments.

Ways to avoid this include mocking external dependencies:

Or use a tool such as VCR which can record the initial HTTP calls with a web service, and save the files locally. Future test runs will make use of the locally saved test files and not make real HTTP requests:

With a unit test:

When the test first runs this will generate a cassette file which is saved to disk for future use:

There is also TCR for recording TCP/binary requests. This file is not stored in a human readable format like VCR's yaml output. Instead it uses Ruby's Marshal library - which is not human readable and may suffer from deserialization attacks. This would especially be a concern if malicious pull requests were to be accepted as part of open source projects.

Wiring up the casette functionality to our test suite: