This article explains how to write a very simple x86 bootloader script which can be used as the entry point to running a custom operating system. It assumes some knowledge of assembly, but hopefully all required knowledge should be available within this stand-alone article.

When an x86 computer turns on, it executes firmware located in motherboard ROM.

There are two main firmware standards:

This article will describe in detail how to write a BIOS bootloader, and does not discuss UEFI.

When an x86 cpu boots, the BIOS is loaded from firmware into memory. It performs various operations such as RAM detection, and other hardware detection/initializations - before finally attempting its boot sequence. During the boot sequence, the BIOS attempts to find a boot disk which will load the operating system - via a bootstrap program.

The BIOS generally checks for bootable disks in a specific order. This is potentially user-configurable, known as its bootdisk hierarchy. For instance, checking in the order: floppy disks, CD-ROM drive, then the first hard drive. The BIOS may handle each disk medium differently. For floppy disks the first 512 bytes are read into memory at a specific location, but extra steps may be required for hard drives which contain master boot record information, and CD-ROMs can be loaded entirely into memory and used as a RAM disk. Regardless of medium, the bootloader script will eventually be loaded at address 0x7C00.

As the BIOS iterates through the disk hierarchy it attempts find the first readable 512 bytes (called its boot sector) which ends with the magic number 0xAA55. Once found, the BIOS now gives control to the code which has been copied at address location 0x7C00.

When the BIOS hands over control to your bootloader, the CPU is in 16-bit Real Mode, and the program counter will be running at physical address 0x7c00. Real mode was the only mode before the 80286 Intel processor which introduced protected mode. All processors initially run in real mode, for backwards compatibility purposes.

In real mode you can:

In protected mode you can:

The following examples are written using the nasm assembler.

You can compile the above assembly with:

At the heart of the above bootloader are various calls to the BIOS to request printing characters to the screen. A simplified example of printing to the screen can be shown:

It's possible to write the compiled binary above to a disk, and attach it to a real computer. It can instead be easier to make use of x86 emulators, such as Bochs or Qemu. These emulators will do exactly everything that a real computer would do, but everything is simulated using software instead of hardware.

Within the same directory as your code:

After running you should see the simple message appear: 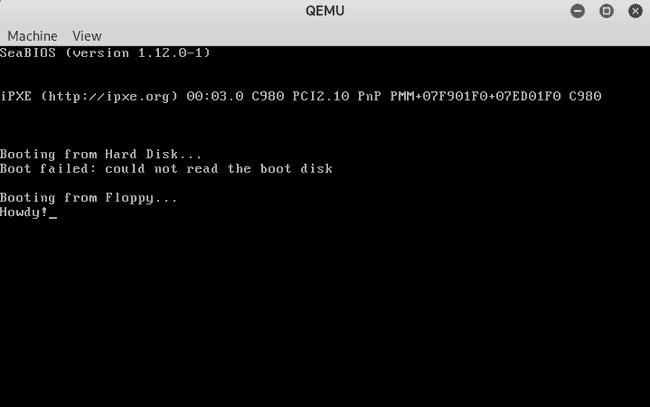 Within the same directory as your code, create a file bochsrc.txt:

Now you can run:

After running you should see the simple message appear: 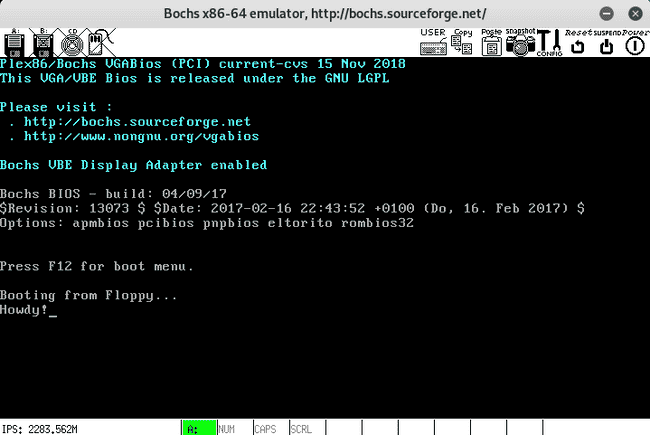 To enter protected mode you must:

The lgdt instruction takes a pointer to a structure in memory that is composed of two parts:

Each entry within the GDT is 8-bytes. A simple overview can be found on the osdev wiki - Global Descriptor Table